In previous Tokyo Ghoul:re Episode, we saw that Tsukiyama Shuu nickname Gourmet, an SS rate ghoul came to save Naki and other ghouls from Koori Ui, Kuramoto Itou, Taishi Fura, and other CCG investigators. In this Tokyo Ghoul:re Episode 16, we see that he has joined them and providing assistance to Naki and Miza with other ghouls. He engaged Koori by his intervention and says to him that he owes the CCG investigator something they did to him and his family. Then Naki suddenly asks Shuu that who he is. Then Tsukiyama Shuu tells him that he will answer by hitting the Investigator with his Kagune.

Meanwhile, in the lab, Nishiki Nishio nicknamed Serpent, an S rate ghoul caught professor Kanou and tells him he was looking for him for a long time. Kurona sees him though, maybe he is one the anime of Kanou. Then suddenly without warning, Shikorae cut Nishio’s kagune in half and stabbed by Roma Hoito. After Nishiki fells to the ground, he tells Roma that she needs to teach her tail like Kagune some manners. But she doesn’t have to worry because he will teach and punish her.

Meantime in Rushima, Urie is fighting with SS rate ghoul (Owl) Takizawa Seidou and asks him about Tooru Mutsuki. He says he doesn’t know where he is but probably he ate him. Urie is enraged by hearing that so he is fighting Takizawa very seriously. But when Urie is going to hit him with a decisive blow, suddenly Akira throws herself over Takizawa to save him. But she injures herself very badly trying to save Takizawa.

While trying to save Takizawa, she recalled her and Seidou’s history of when the two were in the CCG Academy. They are final scores were posted and Akira ranked first and Seidou ranked second in the class. While looking at the scores, Seidou looks at her angrily and congratulated her. 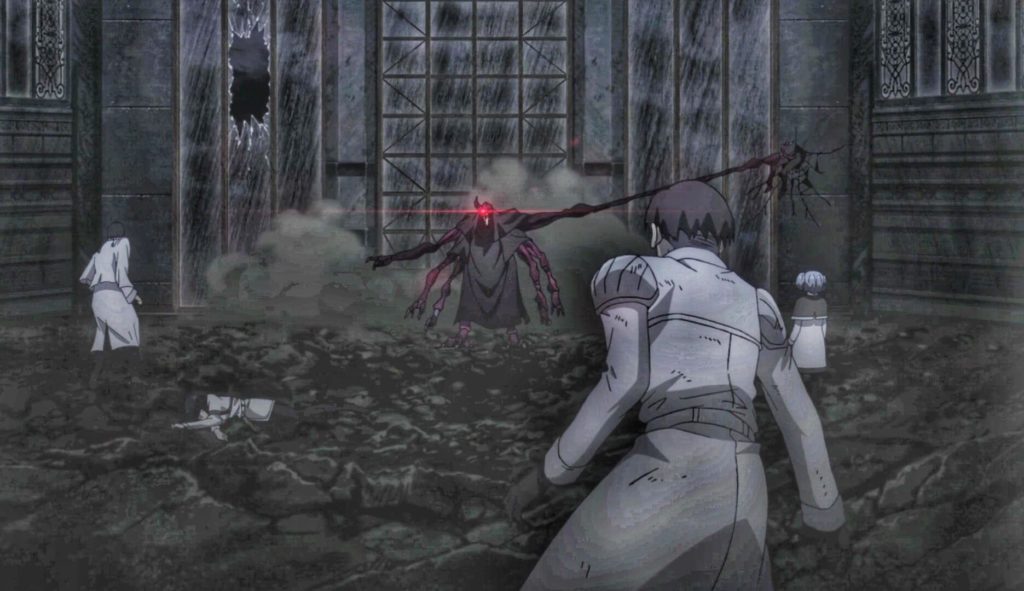 Amon lost control of himself after severely injured by Urie

By remembering her past, Akira is crying. Then Urie asks her what she is doing. Takizawa asks the same question too. She replied by saying that she is protecting a ghoul and she is a failure as an investigator. Akira then fells to the ground by telling her regrets and lose her consciousness. Before Urie and other investigators can attack Takizawa, Amon intervened and tells Takizawa to take Akira from here. She will not survive on her own. Amon tells him to get to Wharf where his friends are waiting. Takizawa then tells Amon that he is a traitor and Killer. He cannot trust him. Amon tells him that he believes in him. Then Seidou took Akira and left. Then Amon started fighting with Urie and others.

Elsewhere, In the lab fight between Roma and Nishiki is progressing. He is fighting Kanou’s Quinx. He is trying to kill four of Kanou’s Quinx who were attacking him. Then Roma appears in front of him to hit him but Kurona saves him by attacking her with Kagune. Kurona tells him that since they both are after Kanou, she will help him. Roma injury healed very quickly because Kurona didn’t hit her Kakuhou. Then she released her kagune but Kurona cut her kagune into two and slashes her belly. With that, they managed to pin her down but she calls Shikorae for help. Shikorae attacks and startles Kurona by using his dual kagune. He has two Kakuhou and because of that he is insane. Nishiki helps Kurona and manages to make Shikorae fall back with a high-force kick. That attack makes Shikorae retreat from the fight in great pain. After that Nishiki denies Roma’s hopeless bluff and took her captive. 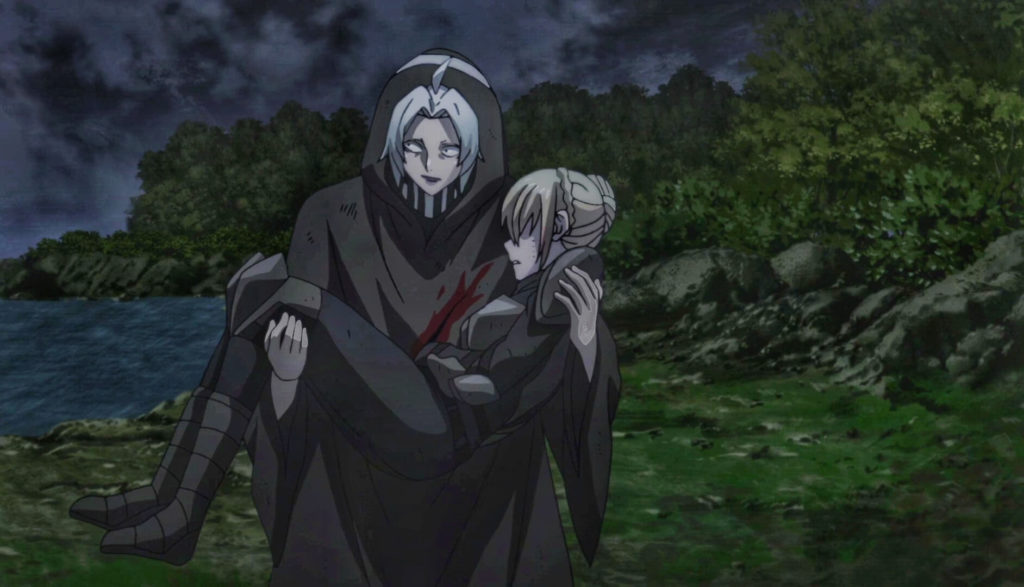 In the fight between Amon and Quinx squad, they are attacking him from all sides. Then he sees an opportunity to attack that allows him to knock Touma Higemaru unconscious and crush the kagune of Shinsanpei Aura, one of the members of the quinx squad.  While fighting, Urie asks Amon where Takizawa taking Akira. He replied by saying that she doesn’t belong to CCG. Amon continues to fight with the Quinx Squad. Suddenly, Urie struck Amon on his shoulder and yells at Saiko Yonebayashi to hit him with her gigantic Kagune. She hit him really hard but he is able to block her kagune. When Saiko remembers, he once saved her life during the Rose investigation, she attempts to gain ownership right on Amon. But Urie declines her. Then Amon connected with a decimating blow from Urie as he throws his Quinque at him and remotely activities it to severely hurt Amon.

The investigators want to go after the Owl and Akira but Urie notices something is wrong with Amon. Because of severe injury, Amon lost control of himself and transformed into a giant Kakuja. He attacks Hsiao and Urie and decimating them both. Then Higemaru activates his frame 3 kagune and attacks Amon but he easily defeats him by shoving him into a wall. Urie angered by that and attacks him but he pins him down easily. Then, Saiko interrupts Amon and asks why he saved her before. Amon replied that it was the right thing to do and that she always needs to keep thinking what was right or wrong, right before he runs away by the broken window.

On Rushima Landing Operation base battleship, Marude Itsuki entered the main control room and confronts Yoshitoki Washuu. He tells Yoshitoki that he secretly investigated Washu clan because of the book “King Bileygr’. But he found that Washu’s are not Ghoul Sympathizer, they are ghoul themselves. Yoshitoki asks him to present proof but he says its a hunch and then shot him in the head and prays that his suspicions were wrong. But as Itsuki Marude opens his eyes he saw Yoshitoki lunges at him with his active Kagune. Then, He flashes back to past meeting Yoshitoki early in his career, and realizes that everything he known till now is a lie. In the fight between them, Yoshitoki died and Marude stands there and watching at his superior.

Meanwhile, in Cochlea, we see Uta accompanies Donato Porpora to Shinme Haisaki’s control chamber of Cochlea and kills him. After that, Uta called Donato Crown and throws him a clown mask with a crown symbol engraved in it. Afterward, Donato tells him that they should go and see the “King.”

Elsewhere in Cochlea, Mortally wounded Arima collapsed with blood pouring from his throat and mouth as Kaneki holds him in his lap. Arima uses his last of strength to confess to Kaneki about his many secrets. He then reveals that he, Hairu and Furuta and all the investigator from Sunlit Garden is Half-human. He also reveals ghoul-human hybrid are bred by the Sunlit Garden. Then Arima asks Kaneki if he knows what happens if a human and ghoul conceive a child between them. Kaneki answered that a One-eyed ghoul or half ghoul is born. Then Arima tells him, that’s not all true. He explained that most of the child between a ghoul and human is a normal human child but they have exceptional physical abilities and they die faster than humans. He also tells him that case like one eyed ghoul is very rare. 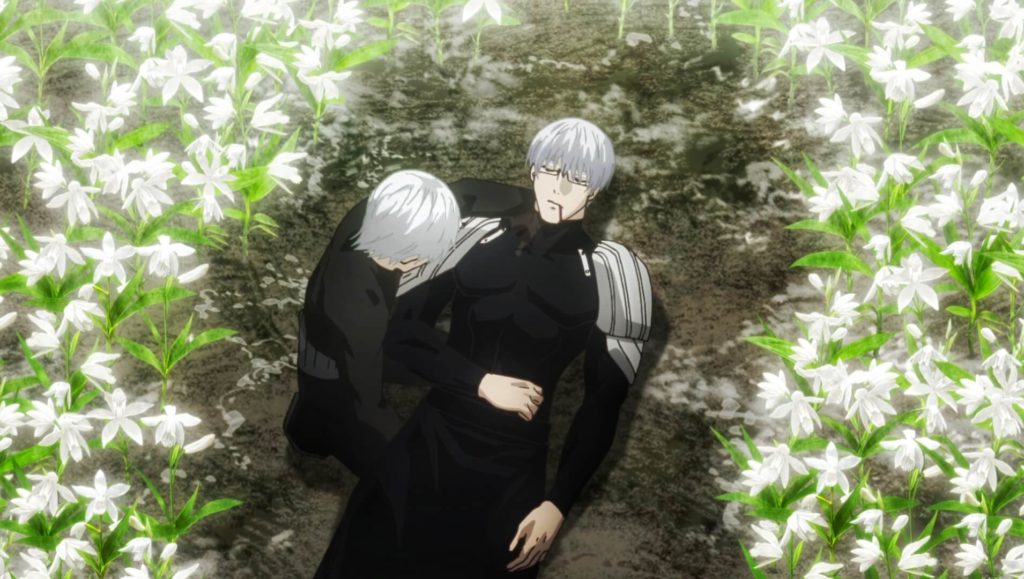 Arima then reveals that he is dying because of his accelerated aging process and he developed Glaucoma because of that. He can’t see clearly with his one eye because of that.After that reveals to Kaneki that all the members of Washuu Clan are ghouls. Then he entrusts Kaneki with his final wish and tells him to kill one eyed King and to take credit for his death. Arima tells Kaneki that Eto (Takatsuki Sen) and he created the myth of one-eyed King. He requests Kaneki to accept that because he is the only one who can do that. Kaneki accepts Arima’s wish. Arima then tells Kaneki that Take Hirako will tell everything in detail. Then he promises to Kaneki that he will understand all the things soon enough. He also admits that he always hated his own existence because he is someone who could only kill and take lives of others but never given anything to the world in return. With his dying breath, Arima praises Kaneki and lifted his hand to touch his face, before he surrendered to death.

After all that, Urie found Tooru in a cave with blood all over him. He lends him his jacket and …………… 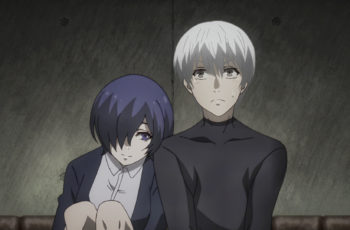 Episode Name: Proof: Bonds In the previous episode of Tokyo … 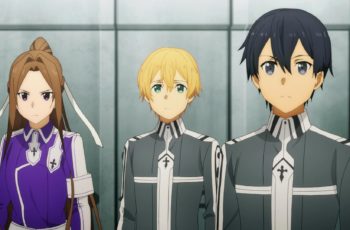